Seth Grabel’s achievement as a Celebrated Performer, Magician and Illusionist is the quintessential American success story “” from his childhood passion for mystery and illusion to his spectacular performance on America’s Got Talent.

Seth Grabel was born with innate entertainment skills as his mother was a professional dancer and his father was an accomplished Magician. Seth was destined for the bright lights of Hollywood.

The stage was set for his meteoric rise to stardom when, at his fifth birthday party, his parents hired a magician to entertain the children. Right away, the impressionable Seth was hooked on illusion. He took an immediate fascination to the idea of thrilling audiences with the art of magic; the awe and joy that results from this form of entertainment.

Combining his acquired marketing and branding experience from his successful father, along with a top education at UNLV, Seth’s love for magic exploded into a serious and lucrative profession.

With a fierce determination and dedication, he began perfecting his magic skills in front of a mirror in his small studio apartment. Soon after, Seth’s mesmerizing talents were in high demand.

In 2006 Seth was discovered by the Amazing Johnathan, and was soon asked to perform alongside him. Seth describes the three year experience as “One of the most incredible periods of my life”.

“I learned everything from timing and precision, to the smallest details, like mental preparation and stressing the importance of showmanship and likeability.” Working with the Amazing Johnathan allowed for the development of a truly fresh sense of humor to be incorporated into his shows. Jonathan’s most imperative piece of advice was to find a way to define yourself as a magician and have your own “signature”.

AcroMagic quickly became Seth’s most defining feature as a performer. This revolutionary concept incorporates Acrobatics and Magic, which allows for a genuine sense of creativity and originality. This form of magic has allowed him to perform for countless celebrities and dignitaries.

Grabel has brilliantly created shows onstage and off that leave audiences with big smiles, eyes widened, and jaws dropped. From the interesting characters he weaves into his stage shows to the amazing slight-of-hand magic he performs up close. Grabel’s talent often leaves people saying, “There goes the next David Copperfield”.

Seth has appeared on EXTRA, Playboy TV, Univision, and CBS among others. He takes every magic trick to the limit, leaving his viewers astonished, completely blurring the lines between reality and illusion.

With an impressive body of work behind him, 2011 marked the year for an official introduction onto the national spotlight. As a highlight performer on NBC’s “America’s Got Talent”, Seth rattled the cage of the entertainment industry, executing various forms of magic””black, illusionary, and of course AcroMagic. He was an overwhelming fan favorite, and brought high praise from all the judges, especially Howie Mandel.

Seth has since been tirelessly perfecting his skills as a magician, acrobat, and comedian while touring and selling out major venues across the country. You’ll also find Seth creates with cooking, as he’s developed his own line of cooking spices.

Whether it’s under a spotlight performing at celebrity events for people such as Johnny Knoxville and Hugh Hefner, or entertaining in some of the most exclusive Las Vegas Night Clubs, you can tell that Seth loves performing. Grabel considers himself an entertainer first, a magician second. His drive is to connect with the audience. Ask any professional magician and they’ll tell you it’s the performer, not the trick.

Grabel’s versatile and powerful magic brings his audiences an abundance of wonder and excitement, which only leaves them asking “How does he do that”.

He’s caught the eye of Las Vegas headliners; they use him a lot to get their audiences into a fever pitch before they themselves walk out to perform. As a frequent opening act for the Amazing Johnathan show and Hypnotist Anthony Cools, Grabel has made Las Vegas his home base.

Grabel is fresh, darkly alluring, girls love him, guys respect his skills and he does original things. Seth has developed a unique fusion of entertainment, combining acrobatics with illusion creating Acrobatic Magic. He has produced his own heart pumping Stage Show and continues to invent new effects that impress and astound.

His success hasn’t wavered his immense passion for helping those who are less fortunate, collaborating with major charities like Best Buddies and St. Rose Hospital.

Seth’s visionary approach to magic continues to escape the confines of tradition, successfully manipulating an audience with illusion and blurring the lines of reality.

Entertaining • High-Powered Mesmerizing • Mysterious Seth has appeared on EXTRA, Playboy TV, Univision, and CBS among others. He takes every magic trick to the limit, leaving his viewers astonished, completely blurring the lines between reality and illusion. 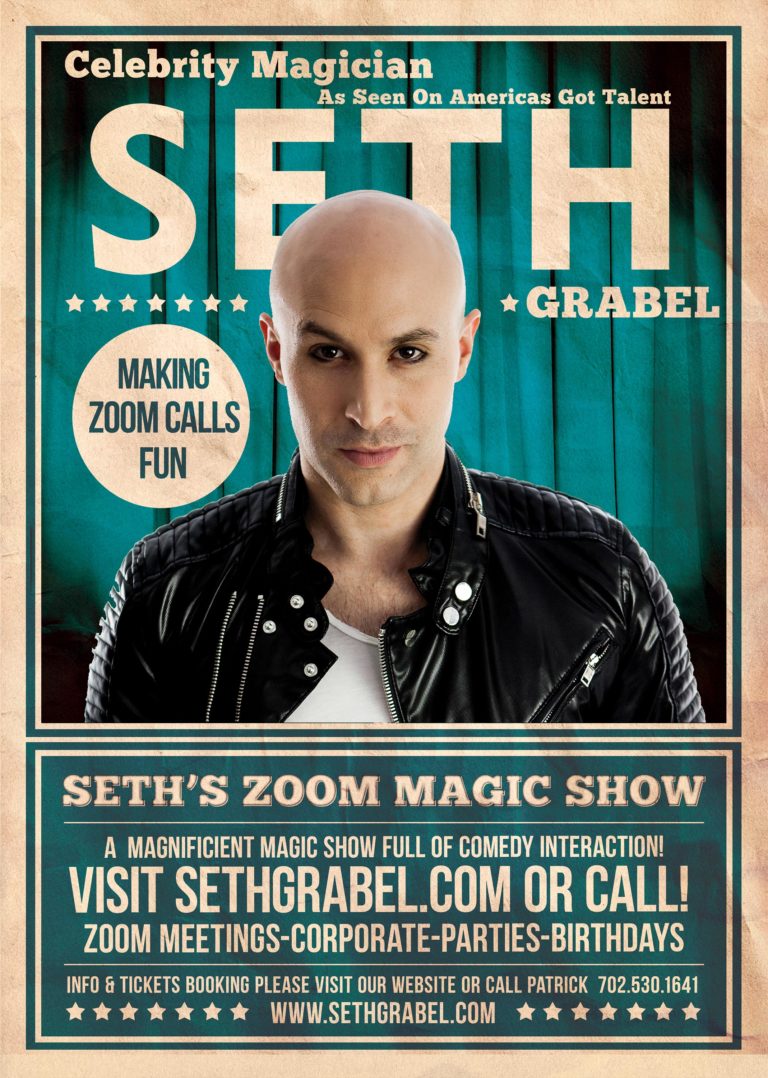 Pick a card any card.

Love is finding a home in each other 💑❤️ .

Lost in the beauty of the world, found in the magi

My deck of cards has a mind of its own! 🃏 Watch

Blurring the lines between reality and magic in Vi

“Bringing the magic to the party! 🎉🎩 Astou

Courage is the magic that turns your dreams into r

All magic is true, but all truth is not always rea

He doesn’t know where the Rubik’s cube has gon

Life holds special magic for those who dare to dre

SUB BELOW FOR FREE MAGIC!