Hey guys. This last week just uncontrollably flew by, “I tried to hold it back, but it was stronger. So I was dancing, yeah”.

I recently got back from G2E (the Global Gaming Expo) that was being held at the Sands Expo & Convention Center. It is an annual exhibition of not only over 500 exhibitors in the gaming industry like IGT, Gtech, and Konomi, but also offers one of the best events of the year for networking opportunities, in depth seminars with industry leaders that shine the light on the how to’s for success in not only today’s market place, but laying out the groundwork for what to expect in the near future on how business is going to change and grow in our current economy. There were quite a few Keynote speakers in the gaming industry as well, specifically giving talks on two focused areas concerning operators and suppliers. Of course let’s not forget the food. There was a lot of it. Not to mention the wine tasting, the cocktails in the Ultra Lounge, and there was a uniform fashion show.

It was good seeing you Cheryl Terhune-Honore!

On top of all that, in Vegas fashion, there was entertainment. Abbamania was there, which is a recreation of a live Abba concert. Then immediately after that, Night Fever performed as The Bee Gees. These two are world renowned and perform together in about 200 concerts a year. As if that wasn’t enough, there was The Bombshells Burlesque show, which pretty much kept eyes wide open the entire time the were, well, doing what they do.

That however was just the beginning of the festivities. There were entertainment awards that followed, performances by comedian Rondell Sheridan, the band ToddsPlanet, and The Bettys from Infiniti Creative. There also were lifetime achievement awards that were praising Richard Strum and Wayne Newton. 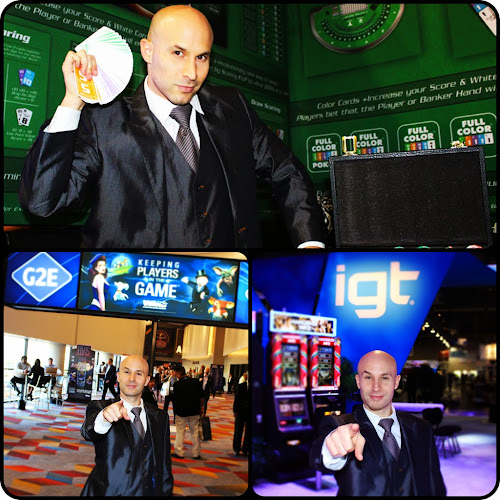 Get this, I got to perform a show for IGT (International Gaming Technology), which is a global leader in casino gaming while at the Expo. Aaaannnnnd I performed at a party where the Eagles actually perform! This is where Robin Loyed (Director of Global Operator Marketing) and Joe Sigrist (Vice President Game Development) were. Patti S. Hart (Chief Executive Officer | International Game Technology) was there too, and she said,

“Seth was the perfect addition to our customer event at Sayers Club—-he brings just the right balance of mystery, humor and intrigue…..and leaves everyone DYING for more.”

I am still so touched on what she said about me.

Anyway, I had such an amazing time I didn’t want it to end. I hope you guys are having a great week so far. The song Waterloo has been in my head since last Tuesday. I can’t stop humming it and it is really starting to drive people nuts. I am also going to attempt to recreate an entrÃ©e dish I had at the expo during diner. Who knows, I might post the creation in my blog for you to try out.

So, what was the last song that you can remember, that got stuck in your head and you couldn’t get rid of it? And how did you get rid of it? Any tips? I swear it’s like Agnitha and Anni-Frid are standing on either side of me dressed like early 19th century French military leaders; singing.

“A quiet man is a thinking man. A quiet woman is usually mad…”